Your cart is currently empty

An article about Llyn Padarn with reference to history, ecology and activities.

Llyn Padarn is located in the heart of Eryri, (Snowdonia) in the valley created by the mountains of Yr Wyddfa and Y Glyderau. The closest village to Llyn Padarn is Llanberis which is located on the shoreline to the south eastern end of the water.

Llyn Padarn was formed thousands of years ago as the glaciers receded during the last ice age. Measuring approximately 3.2km long and 500m wide at the widest point with the deepest part of the lake around 30m deep, Llyn Padarn is one of the largest natural lakes in Wales. The main flow of water enters Llyn Padarn at the south eastern end from Llyn Peris which is fed by a collection of mountain streams and rivers that culminate in the Afon Bala. Water leaves Llyn Padarn at the north western end and flows to the Menai Strait near Caernarfon via the Afon Rhythallt and the Afon Seiont.

It is believed the name Padarn comes from a 6th century saint Padarn, who's name is also linked to the local church in Llanberis.

Standing some 15m high, this circular tower stands on the high ground at the south eastern end of Llyn Padarn. It was built around the 13th century by Llywelyn the Great to act as a defensive post between Caernarfon and Conwy. Towards the end of the 13th century Owain ap Gruffudd was imprisoned in the castle by his brother Llywelyn ap Gruffudd, grandson of Llywelyn the Great while a power struggle for Gwynedd took place.

During the 14th century the castle became a manor house but by the 18th century it was a ruin and lay uninhabited. Dolbadarn castle is now maintained as a grade 1 listed building by Cadw and is open to the public. The views across Llyn Padarn from the castle are pretty impressive especially as the sun sets.

On the opposite side of the Llyn Padarn is Glyn Rhonwy, another series of slate quarries that run up towards Moel Eilio. Narrow gauge railways were used to transport resources and product from the mountain sides down to the shores of Llyn Padarn where the slate would be packed into crates before being transported on to Port Dinoric, (Felinheli).

Towards the end of the 19th century quarrying was at its peak with almost 100,000 tonnes of welsh slate was being produced annually and transported for building projects across the globe. The industry was easily the largest employer in the area with approximately 3000 people from the local towns and villages working in the quarries.

During the second world war part of the Glyn Rhonwy quarries were used as an ammunition store. There is a dramatic story about an explosion in one of the storage facilities that resulted in a roof collapse.

Since quarrying for slate around Llyn Padarn finished in 1969 what was left by the industry has evolved in to various tourist attractions. At Gilfach Ddu there is a free to visit slate museum and quarry hospital which gives you a real taste of what it must have been like working in the quarries before health and safety had properly evolved. At Gilfach Ddu you can also so see the largest water wheel on the UK mainland. Measuring over 15 metres diameter it was used to power the machinery in the slate sorting sheds. The now flooded Vivian quarry has become a scuba diving centre. The railway that transported slate along the northern shore is now a tourist attraction which draws many visitors throughout the year. The railway track that used to run along the southern shore in now the Las Lon Peris a tarmac cycle track that connects Llanberis to Brynrefail.

The importance of the slate industry has recently been acknowledged by UNESCO who have awarded the north Wales slate quarries world heritage status. You can read more about UNESCO here . 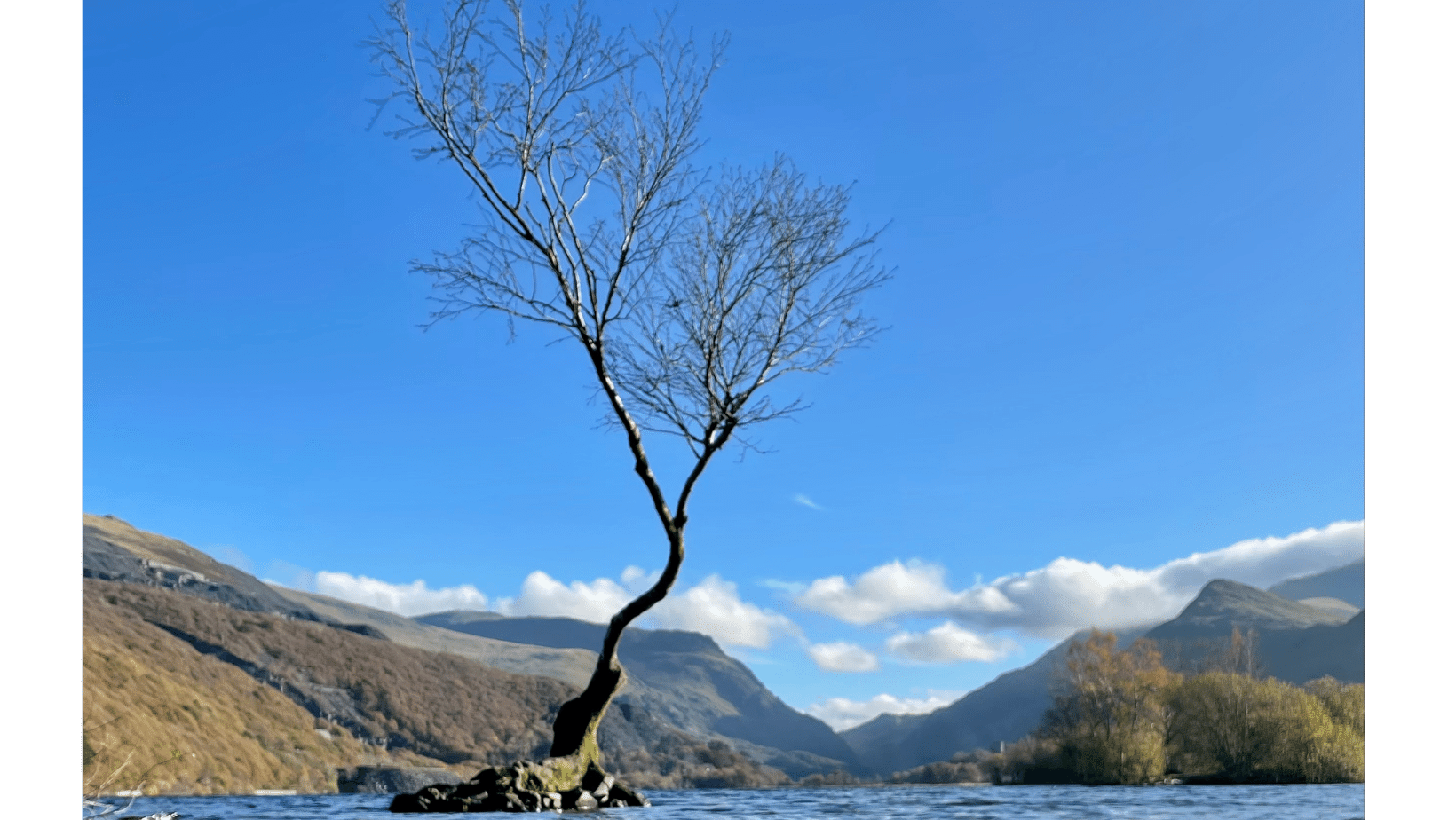 Llyn Padarn was the venue for the rowing event at the 1958 Commonwealth Games there is a nice article by the Australian team that can be found here. Rowers still regularly use Llyn Padarn for training sessions, if you’re out and about early on a calm morning you may well spot one of the Bangor University boats pulling hard and moving fast. In recent years Welsh Rowing have also used the lake for training camps. Maybe one day someone will decide to hold more races on the lake. 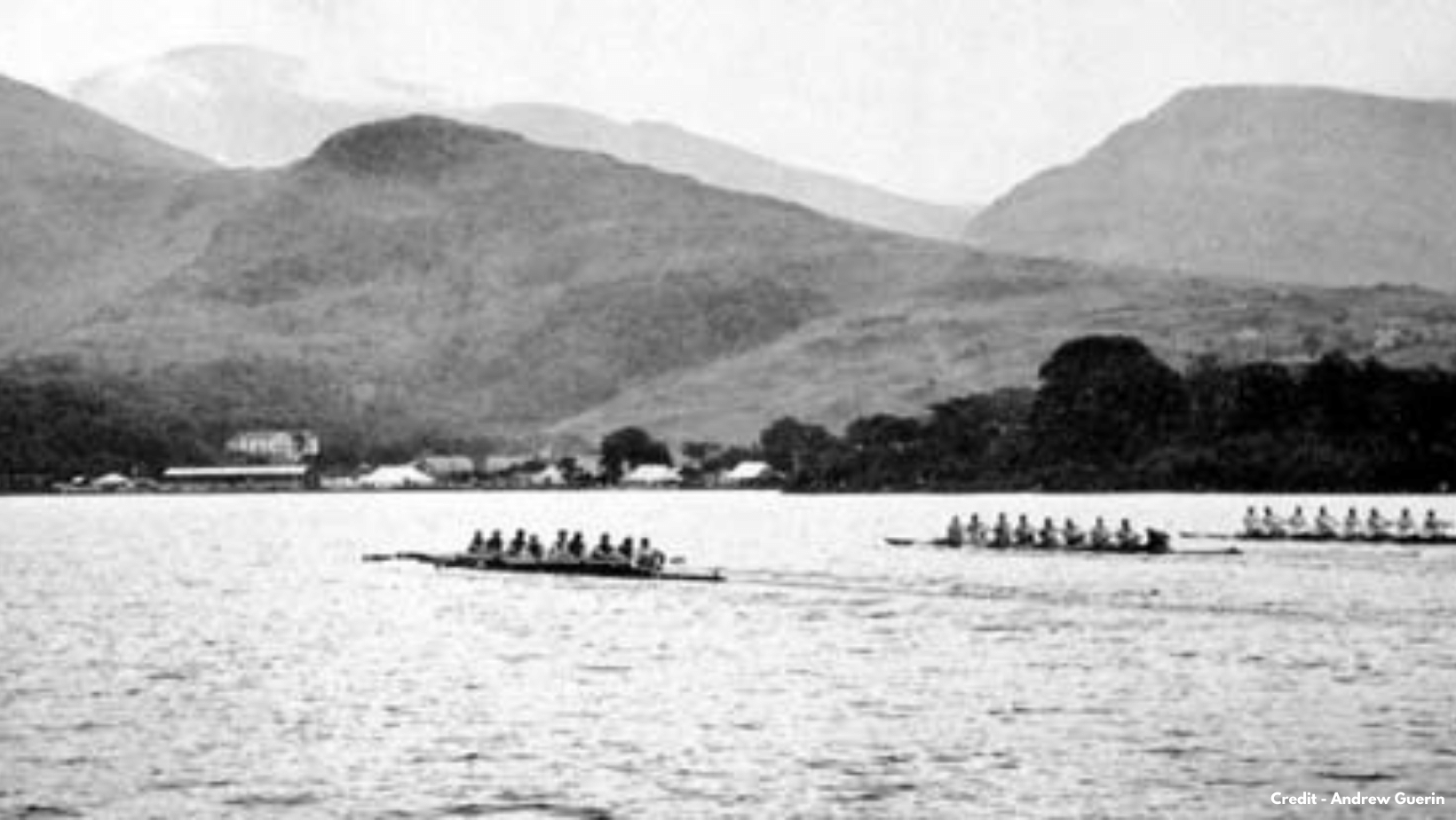 In 1993 an RAF Wessex helicopter crash landed into Llyn Padarn while transporting some air cadets, sadly the accident resulted in three fatalities. The tragedy happened during the summer holidays and was captured on camera from the lake railway. A memorial plaque was installed in memory of the lost lives which can be seen on the shoreline close to the carparks at Y Glyn. 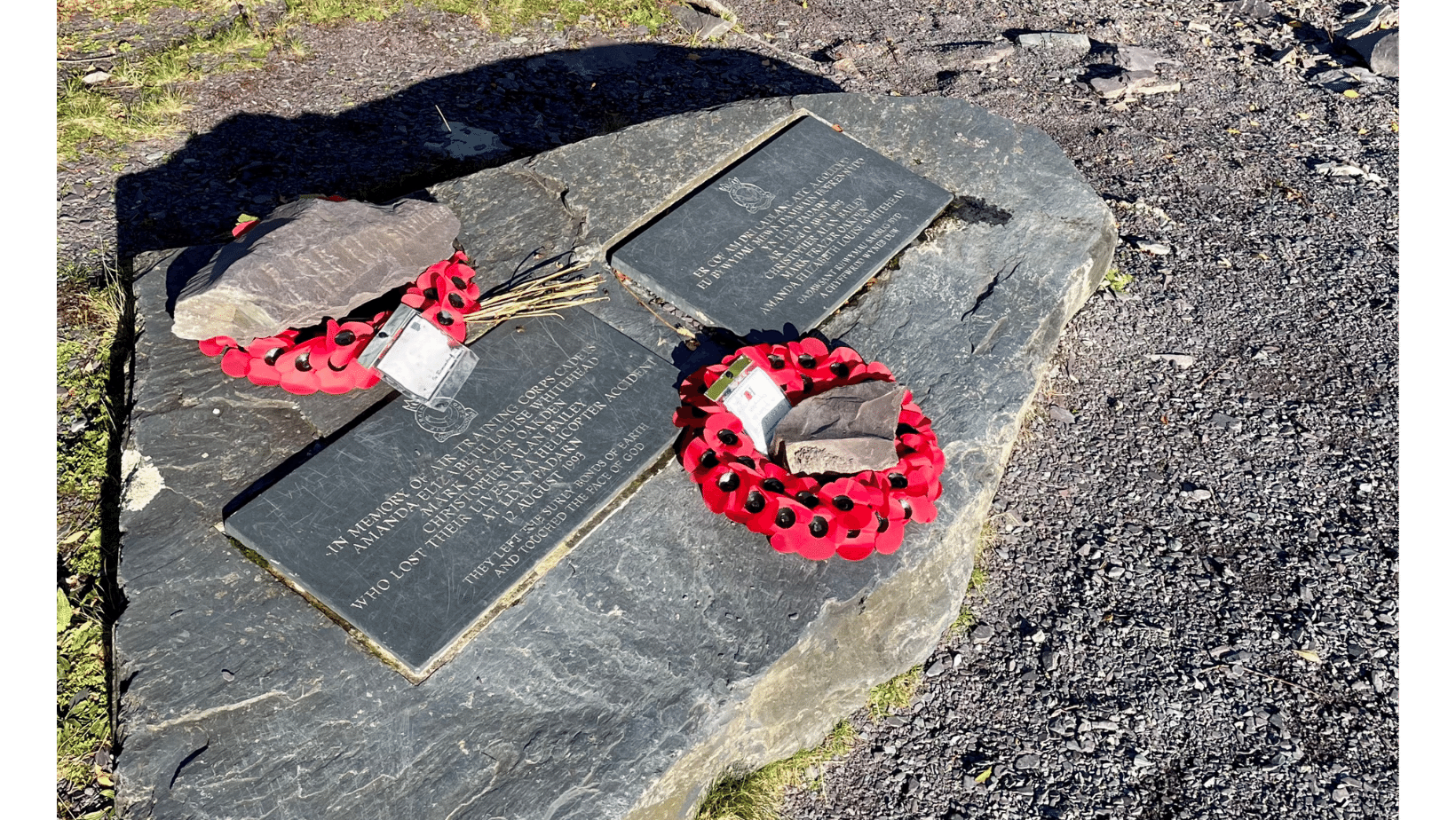 Llyn Padarn and the surrounding woodland is designated a SSSI, (Site of Special Scientific Interest). The lake is home to arctic char, a fish usually found in far colder locations. The char in Llyn Padarn have evolved over the years and are genetically different to arctic char found in other lakes. If you're really lucky and paddle quietly you might spot things like otters and kingfishers. The lake is also home to a plant called floating water-plantain which again is nationally very rare. The ancient sessile oak woodland that runs along much of the shoreline is home too many creatures including bats, birds and insects. The bats often swoop down to water level at twilight which can make for a memorable paddle or swim.

On a busy day in the summer holidays it is likely you will see a wide range of activities taking pace on the water including swimming, canoeing, kayaking, paddleboarding, rowing and fishing. On windy days you may spot dingy sailors or wind surfers. In general, motorised craft are not permitted on Llyn Padarn unless they have been issued a license by the council/Parc Padarn.

Around the shores of the lake there are plenty of attractions to look out for. If you want to walk around the lake there is a well sign-posted footpath. Many photographers visit Llyn Padarn to get an impressive landscape picture. The Lone tree has become a popular destination for many photographers, with Pen y Pass as a backdrop and a nice sunrise it certainly makes for a good picture. In Gilfach Ddu there are activity providers, craft shops and cafes as well as the lake railway and the slate museum. Rowing boats are available to hire during the summer months from the village car park next to the children’s playground. 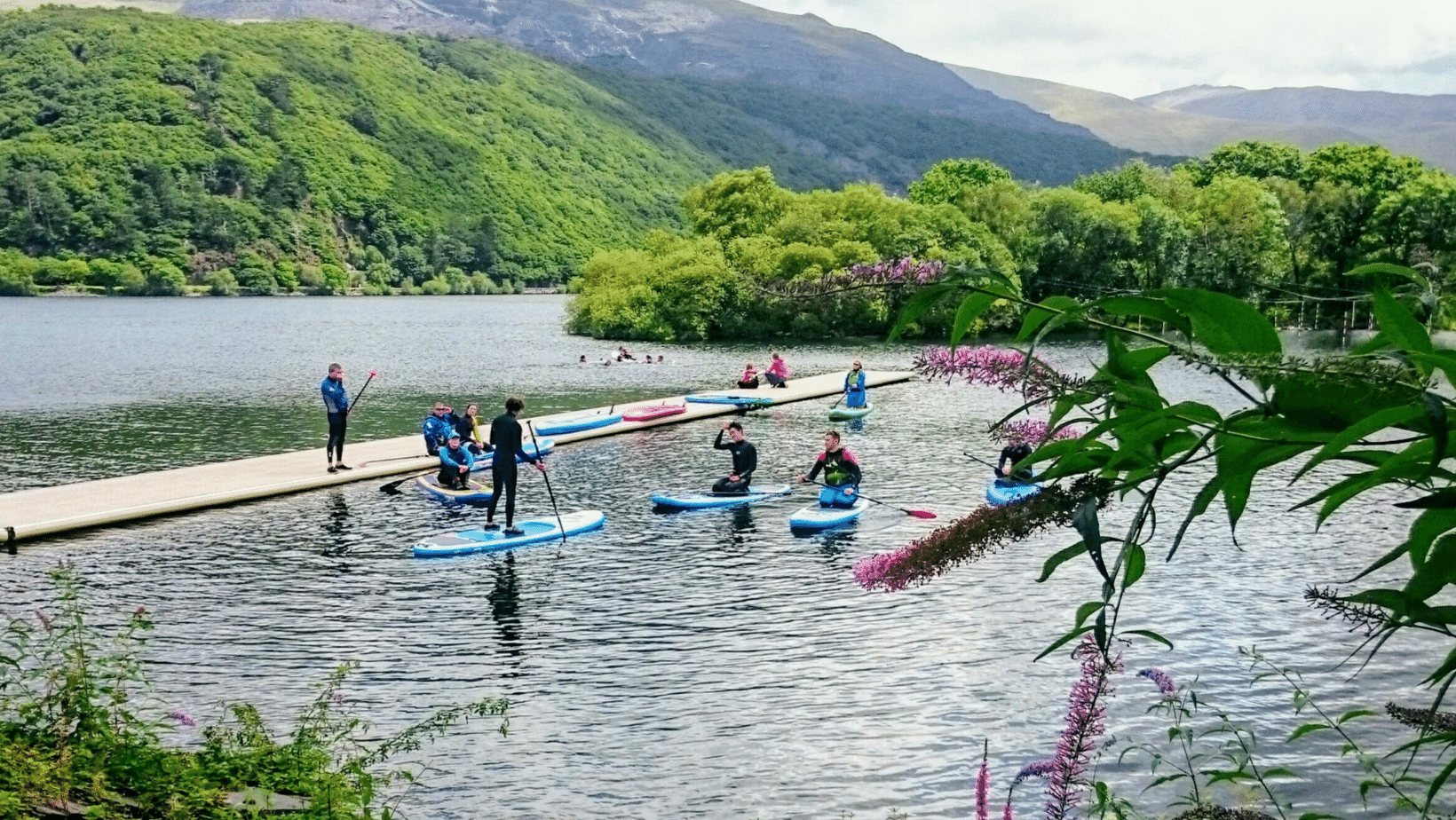 Gwynedd Council are responsible for the majority of Llyn Padarn with the day to day management duties being carried out by Parc Padarn wardens who’s offices are located next to the quarry hospital in Gilfach Ddu.  There are plenty of access points for people who wish to swim or paddle at Llyn Padarn. The easiest access points are next to the carparks around Llanberis, Y Glyn and Gilfach Ddu. The shoreline around Llyn Padarn has areas that should be avoided by paddlers and swimmers. The local fishing club own a section of the lake that runs parallel with Lon Las Peris and they also own a section of land close to the bridge at Penllyn, paddlers and swimmers should avoid these areas if at all possible. The lake railway technically has many of the same restrictions on access as a normal railway track so in theory you should not walk along the tracks or cross them at unauthorised locations. There are a couple of privately held areas of land close to the village, one between the "sword" carpark and the carpark at Y Glyn. The second area being around the small boathouse beyond the Y Glyn carparks. At certain times of the year the shallow water in the Afon Bala and close to the outflow at Penllyn are used by arctic char for spawning. Once again paddlers and swimmers are asked to avoid these areas so the fish aren’t disturbed.